2019 NYCAHC BOARD OF DIRECTORS ANNOUNCED

The New York City Association of Hotel Concierges is pleased to announce their 2019 Board of Directors. 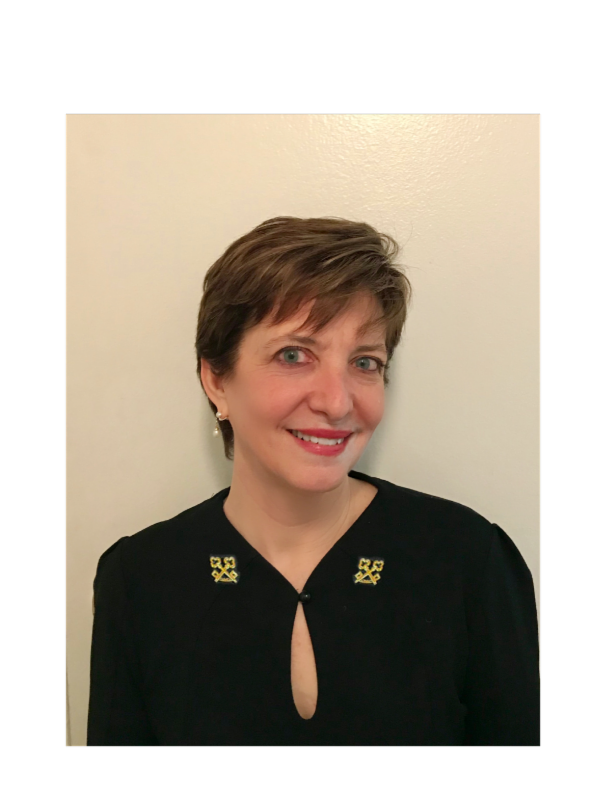 Regena Falling, Chef Concierge at Park Hyatt New York and part of the opening Concierge Team in 2014, was elected President of the New York City Association of Hotel Concierges (NYCAHC) on January 22. 2018; prior to having served as the Vice President of the Association. This year she will once again be serving as your President. Prior to relocating to New York City in 2010, Ms. Falling served 10 years on the Board of Directors of Les Clefs d’Or USA, as Director of Membership, Vice President and President. She was also fortunate to have served as President of the Hotel Concierge Guild of Seattle. At the 2015 Hotel Excellence Awards/Silver Plume Awards, held on January 25, 2016, and sponsored by InNY Magazine, Ms. Falling was honored by her peers with the Silver Plume Award for Chef Concierge of the Year.
Ms. Falling expressed, “I am thrilled to be representing members of the New York Association of Hotel Concierge, which include more than 200 Hotel Concierge professionals representing over 24,000 Hotel rooms in New York City. Our members’ vigilance in their quest for knowledge and unwavering dedication to their profession, their hotels, and their guests is what truly inspires me and continues to drive our relevance. We, as concierge, are committed to creating lifelong memories for our guests and driving fierce loyalty to our hotels”
The founders of the New York City Association of Hotel Concierges knew that the work of a dedicated, lobby level Concierge employed by the hotel was a singular calling worthy of distinction. Ms. Falling, the board of directors, and members of the association are uniquely leveraged to enhance a hotel’s cache with the community as ambassadors, locally and even abroad. NYCAHC upholds a high standard of integrity and ethics for all concierges, both inside and outside the organization.
In her role as President, Ms. Falling continues to lend her creative style of leadership to support the Board of Directors and the membership-at-large as they navigate the ever-changing landscape that is the hallmark of the Hotel Concierge profession.
VICE PRESIDENT AND SECRETARY
Mr. William Hawkins
Concierge, Mandarin Oriental New York 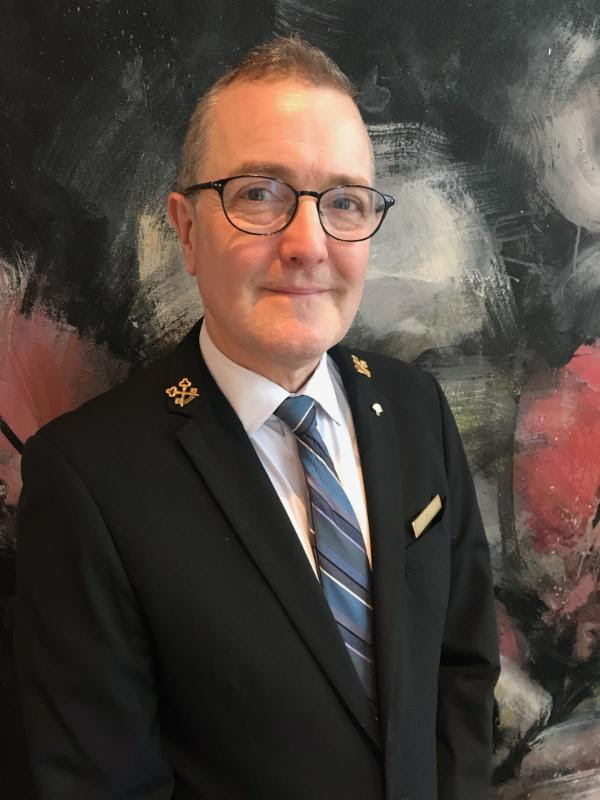 William Hawkins is honored to continue serving as your Vice President, as well as the position of Secretary. A member of NYCAHC since 2010, Mr. Hawkins prior to his position now, served as NYCAHC’s Director of Communications and Community Outreach for two full years. Mr. Hawkins is also proud to have been on the board as a member of the Association’s Membership Committee. As Director of Communications and Community Outreach, Mr. Hawkins has led many of the Association’s charitable endeavors, including the MillionTreesNYC Campaign, the Fare Share Friday dinner with Crossroads Community Services, and has been the captain of the 2016 and 2017 NYCAHC AIDS Walk Teams; each of which broke fundraising records and secured NYCAHC’s status as a prestigious “Gold Team” in honor of the team’s exceptional support for GMHC and the other AIDS service organizations benefited.
Prior to working in hospitality, Mr. Hawkins was a licensed attorney and commercial litigator for seven years before leaving that career in 2006 to follow a passion for service. He began this new career as Concierge at the Mark Hotel, then serving as a Concierge at The Alex Hotel for more than five years; before he moved to The Mandarin Oriental New York in 2012. Mr. Hawkins was honored to have been accepted as a member of Les Clefs d’Or USA in 2014, and again honored to have been nominated for the “Concierge of the Year” award at the 2016 Silver Plume Awards, and was even more honored to have won the Silver Plume Award for Community Service at the 2017 Hotel Excellence Awards gala on January 29, 2018.
Mr. Hawkins hopes to use his prior Board experience and familiarity with the organization’s communication structure to support the President and other Directors in their positions, and make certain that goals are set and met for the coming year, as we address new challenges, all towards creating a more vital community, a strong profession, and a positive public perception of our role both by guests and by Hotel management.
TREASURER
Ms. Anabela Moumdjian
Concierge, The Mark Hotel 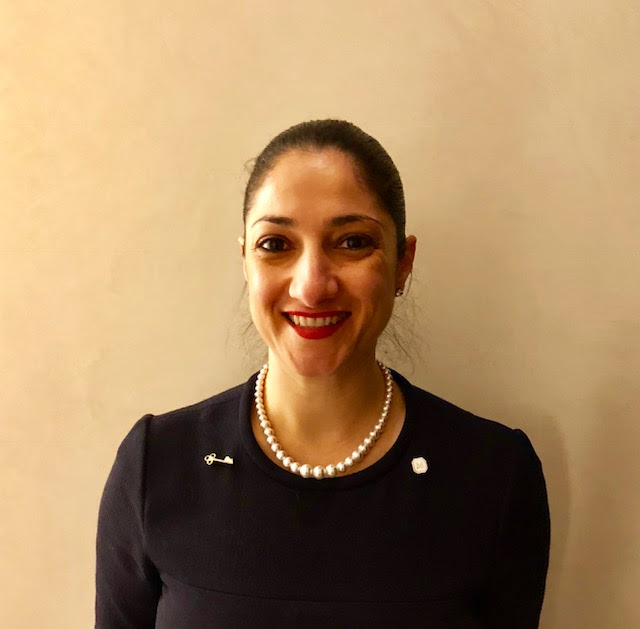 Anabela Moumdjian is proud to once again join The Board of Directors this year and serve as the Association’s Treasurer. Ms. Moumdjian has been working in the hospitality industry for over 20 years in Argentina and in the United States. Ms. Moumdjian first started her career as a Front Desk agent, moving on to a Front Office Manager at some of the most prestigious hotels in New York City, before becoming a Concierge in 2007; holding the position of Assistant Chef Concierge at The Hotel Plaza Athenee. She is honored to be working, at this time, as Concierge at The Mark Hotel.
She became a proud member of NYCAHC in 2013 and has always been an active participant in community activities and social events. In the past, she was fortunate enough to have served on the NYCAHC Ethics Committee.
As Treasurer Ms. Moumdjian plans on continuing with the financial growth of NYCACH following the path created by previous talented colleagues: “We have an excellent system in place.  We need to continue implementing processes that help us bring more revenue to the Association in order to fulfill our Charitable and Crisis funds, as well as providing our Members with the financial support they deserve.”
DIRECTOR CORPORATE MEMBERSHIP
Mr. Charlie Loor
Concierge, The Pierre, A Taj Hotel 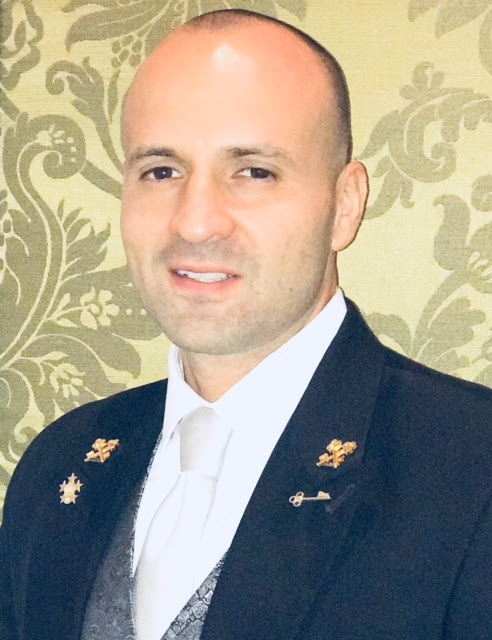 Charlie Loor was elected to the Board of Directors on January 22, 2018, and will once again serve as the Corporate Membership Director of the New York City Association of Hotel Concierges (NYCAHC). Charlie has been a member of the Association since 2013; and has participated in many Association-sponsored events, particularly the Association’s annual Trade Show, in which representatives of vendors, attractions, restaurants, and other service partners are afforded the opportunity to meet members of the Association face to face.
During his time as a member, in 2017 he was recognized by his esteemed members of the association with the Rising Star Award. Most recently in 2018, he was honored by his peers with the Silver Plume Award for Concierge of the Year at the 2018 Hotel Excellence Awards.
Charlie was accepted into Les Clefs d’Or USA in 2016 and is eager to become more involved with the both Les Clefs d’Or and NYCAHC as the years go on.
SOCIAL DIRECTOR
Ms. Tea Ferrari
Concierge, The Times Square EDITION 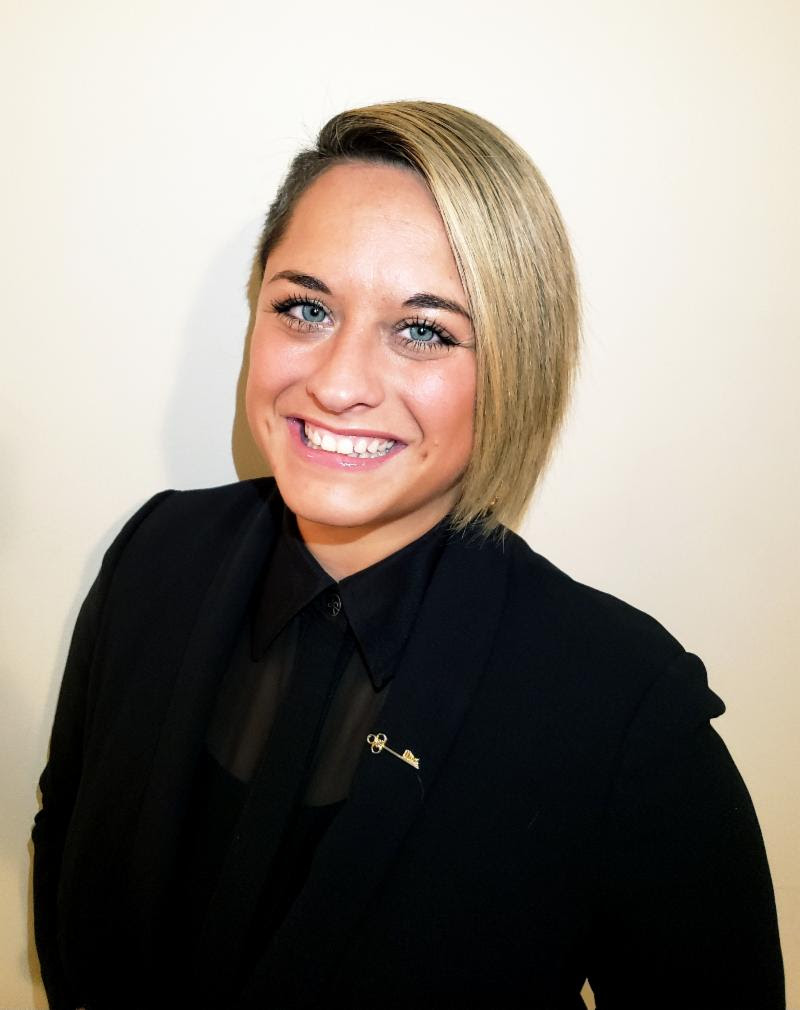 Tea Ferrari is honored to have been elected this year as the Social Director of the New York City Association of Hotel Concierges (NYCAHC).

Ms. Ferrari has been in hospitality for over 10 years working for SLH properties in both Italy and in New York City for the Gansevoort and The InterContinental Barclay. She is excited to be part of the opening team of The Times Square EDITION this year.

Ms. Tea Ferrari is proud to serve the Board of Directors and is eager to give back to the Concierge Community, as she stated: “Becoming a member of the Association has helped me on many levels, for example: better understanding the dynamics of our profession, comparing how fellow colleagues handle requests, building a solid network of contacts, but most importantly it is through the Association that I met great, loyal, reliable, and unique people who I have the fortune to call Friends today.”

In her new role as a Social Director, Ms. Ferrari will continue to build relationships and partnerships as well as share creative and exciting events that our City has to offer. 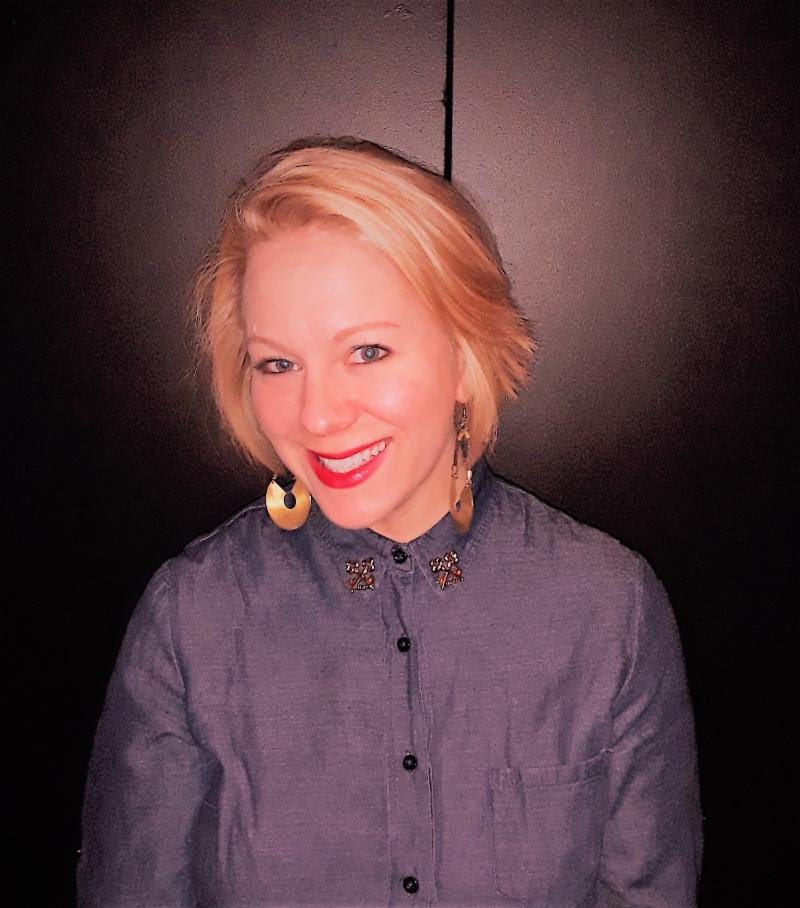 Briana Davis-Greer is humbled to have been elected to the Board of Directors of the New York City Association of Hotel Concierges (NYCAHC). Having been appointed Director of Communications, Community Outreach and Public Relations, she looks forward to continuing the wonderful work past Board Members have done and working on finding more ways to connect New York City with the Association.
Having spent 20 years in the entertainment, hospitality, and service industries, Mrs. Davis-Greer hopes to use her network of contacts and the eclectic set of skills she’s acquired from a variety of experiences to elevate and enhance the community. She has been a member of NYCAHC for four years and in August 2018 she was accepted into Les Clefs d’Or.
Mrs. Davis-Greer looks forward to serving on your Board of Directors and thanks the Concierge Association for this opportunity.
MEMBERSHIP DIRECTOR
Mr. Michael Sinatra
Concierge, Park Hyatt 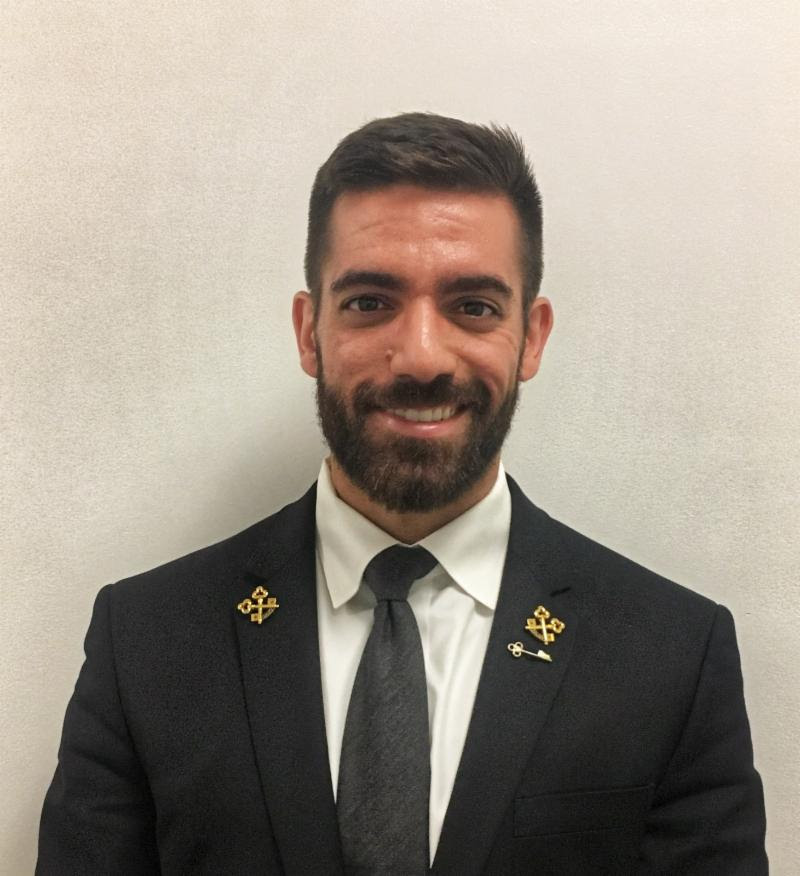 Michael Sinatra is thrilled to have been elected once again to the board of NYCAHC, in the title role of Membership Director. Having joined the Park Hyatt New York as part of the opening team, he is proud to have just celebrated his 5th year with the Hotel.
Michael graduated from NYU with a degree in hospitality management and has worked as a front desk agent, trainer, and concierge at various Walt Disney Resorts throughout the world. After focusing his career as concierge back in New York City, he was happy to join the team at Le Parker Meridien and then moving onto The London NYC.
He was recently accepted into Les Clefs d’Or USA and looks forward to welcoming new members to our association.
PAST PRESIDENT ADVISOR
Ms. Loida Diaz
Concierge, The Trump International Hotel and Tower

Loida Diaz, Concierge at the Trump International Hotel and Tower, has been appointed Past President/Advisor of the New York City Association of Hotel Concierges (NYCAHC). Ms. Diaz has served on the organization’s Board of Directors since 2003. She was the recipient of the 2009 Concierge of the Year Award.
Ms. Diaz was passionate about developing the concierge community and its relationship with New York City at large. She explains, “As one of the pioneer members of the New York City Association of Hotel Concierges, I take great pride in the progress we have made building this organization into one of the most respected civic organizations in New York City. The Concierges are the ambassadors for this great city, and we take great pride in giving back to the community through the Association.”
Ms. Diaz has been instrumental in the success of many initiatives for the Association over a decade and served in leadership positions including Social Director, Membership Director, Vice President Public Relations and appointed 3-term as President.  She was instrumental in building the association’s funding program through corporate membership. Under her Presidency, the association has reached its highest fund-raising goal for the organization and as a result the NYCAHC Crisis Fund was established to help its members and simultaneously has supported several NYC based-charities “I give credit to my former  Board and the support of our members for achieving our goals during my tenure as President.”
Ms. Diaz would like to continue the vision of the organization and surpass what we have achieved, “As Advisor, I am here to support the mandate, agenda, and goals of the newly elected President, Madame President Falling and her Board.  I strongly believe that the success of our organization depends on its Board members hard work and the seemingly never-ending dedication of our members.”
“I strongly believe that Madame President Falling and her Board will continue bringing the organization to a new level of professionalism and respect across the New York City community.”
Media Contact: Briana Davis-Greer, Director of Communications and Community Outreach for New York City Association of Hotel Concierges.  You can contact her at : PR@NYCAHC.ORG
William Hinds2019-02-23T17:33:11+00:00